Track & Field stars prove they are #ForeverFaster at PUMA School of Speed #1 in Paarl! 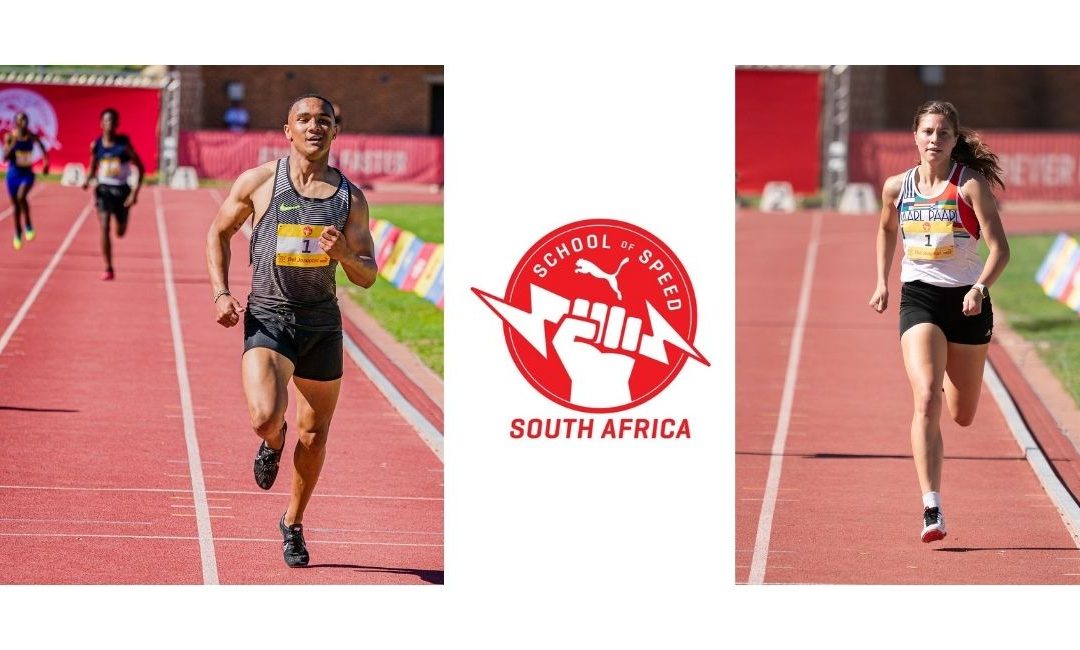 The Dal Josaphat Athletics Stadium (Paarl) was a hive of activity on Saturday 30 October 2021 with a strong contingent of junior track & field stars toeing the line ready to prove that their future is #ForeverFaster at the PUMA School of Speed #1.

“The PUMA School of Speed #1 in Paarl was the perfect start to the 2021 PUMA School of Speed Series” says PUMA Marketing Director Brett Bellinger.  “SA’s junior athletics stars were clearly hungry for competition.  This resulted in nail-biting performances on the field and on the track.  We were impressed both by the performances and the spectacular sportsmanship that was showed amongst competitors.  The athletes proved that their future is indeed #ForeverFaster.  We can’t wait to see what the PUMA School of Speed #2 will deliver in Tshwane on Saturday 06 November 2021.”

Brenda du Toit from La Rochelle Girl’s High School (Paarl) claimed gold in the Girls U19 200m in 25.90 seconds.  “The PUMA School of Speed is a great Meeting and a very good opportunity for young athletes,” says du Toit.  “The spirit is amazing, it’s such a fun Meeting to take part in.  Everybody is supportive and nice and there is always music playing, which keeps the spirts high. Claiming gold means a lot to me.  It shows that the hard work that I’ve put into my training is paying off, so I’m really happy with it.”

Bradley Olifant (Worcester Gymnasium) showed his competitors a clean pair of heels in the Boys 200m claiming victory in 21.46 seconds.  “It’s a huge privilege to take part in the PUMA School of Speed.  As an athlete I just want to build more speed and I want to continue improving.  Finishing first does mean a lot to me.  The last time that I ran the 200m was in April, so it feels good.  I’m happy with the win.”

Brenda du Toit (La Rochelle Girl’s High School, Paarl) claimed another victory on the day this time in the Girls U19 400m in an impressive time of 59.45 seconds.  “I felt tired having just ran the 200m.  I’m not 100% happy with my performance, but I’m happy for now.  It means a lot to finish first.  I still have a lot of work to do, but I am on the right path.”

Running for Paarl Athletics Club, Adrian Swart from Caledon was the athlete to beat in the Boys U19 400m.  Swart crossed the finish line in 49.00 seconds.  “This is the fourth time that I take part in the PUMA School of Speed and it was by far the best one.  I liked the vibe, the performance by Jimmy Nevis and the officials.  I came into the competition knowing that I wasn’t the favorite and that I’d be competing against many talented runners.  I just gave my best from the start.  I slipped out of the blocks and had to work hard to come back and earn my spot.  I reached my goal as I just wanted to win a gold medal at my final PUMA School of Speed event.”

Representing Tygerberg High School in the Girls U19 100m, Hannah Stephens (Bonteheuwel) secured the top spot on the podium in 12.94 seconds.  “The PUMA School of Speed is an amazing event that showcases amazing talent.  The competition was tough, but I trust the Lord and I made it to the finish line which I’m grateful for, so it was good.  It means everything to me to get the support that I need and to get the gold medal from PUMA is fabulous.”

Bradley Olifant (Worcester Gymnasium) continued his winning streak with the sought- after victory in the Boys U19 100m.  Olifant crossed the finish line first in 10.65 seconds.  “I am my own opponent, so it’s not about other competition to me,” says Olifant.  “I ran my PB in the heats and achieved my goal.  The 100m is my main event, so I am happy with my performance.”

EXCITING NEWS:  The PUMA School of Speed Series welcomes individual athletes and/or schools who believe that their future is #ForeverFaster.  Junior track and field stars between the ages of 14-19 can follow in the footsteps of Usain Bolt.  All entrants will stand a chance to be scouted and contracted to the PUMA #ForeverFaster Squad. The top identified talent will be awarded PUMA CONTRACTS at the conclusion of the series!