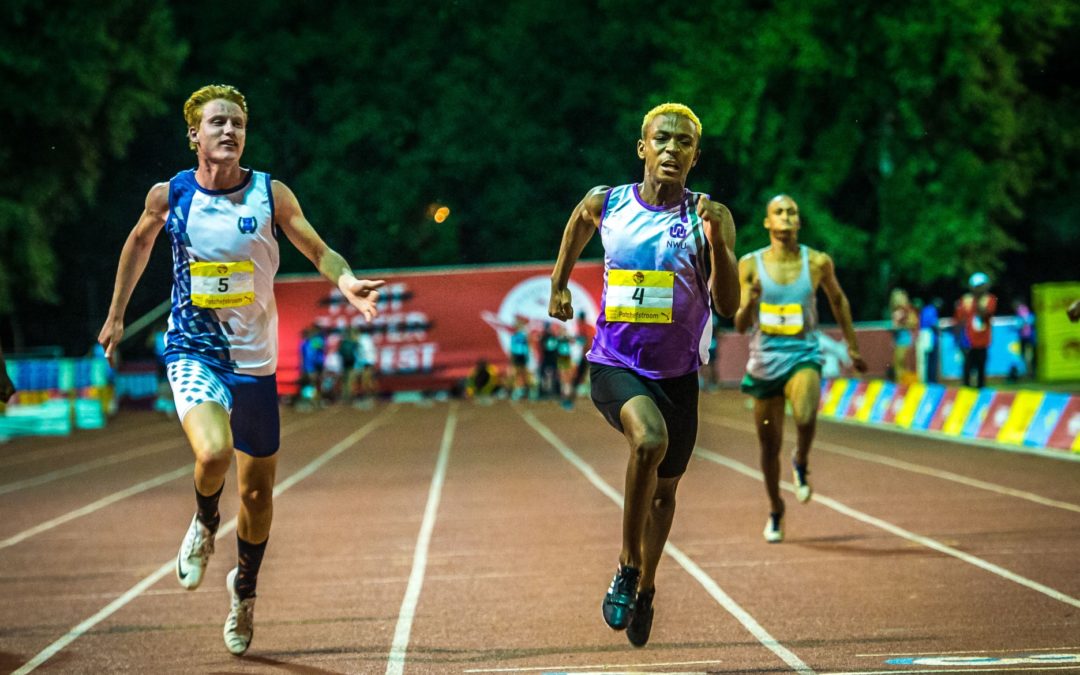 Headed by Usain Bolt, the PUMA School of Speed Series was launched in 2016 by PUMA and Stillwater Sports with the goal of identifying exceptional young South African athletes who believe that their future is #ForeverFaster.  This exciting series caters for track & field stars between the ages of 14-19 and features the following events:  100m, 200m, 400m, 800m, 1500m, Long Jump, High Jump and Hurdles.

Mojela Koneshe (Pukke North West University / originally from Lesotho) clocked the fastest time in the Boy’s U19 100m crossing the finish line in 10.85 seconds.  “It’s an honor to come first in the U19 category.  I came to Potchefstroom to attend school and take part in sports.  I found a new coach who is really taking care of me.  The results are showing on the track.  The PUMA School of Speed series is amazing.  The atmosphere is absolutely fantastic, everyone is excited, it’s vibrant and the competition is good as well.  You actually want to push harder because this is PUMA, Usain Bolt’s Series that he started.  My advice to other athletes is to work hard every single day.  You have to make sure that this is your passion, but the main thing is to have fun.  You have to enjoy running and enjoy sprinting.”  Liam Walsh came in 2nd, while Phumzile Eno Mqolo finished 3rd.

Toinette Murray (North-West University / Potchefstroom) claimed the top spot on the podium in the Girl’s U19 100m in an impressive time of 12.31 seconds.  “I take part in the PUMA School of Speed every year.  It’s one of the events that I look forward to the most.  The event is well organized and the athletes are made to feel special.  It’s a privilege to be able to run here and it’s an honor to finish first.  The girls that ran today are stunning athletes.  It takes hard work, so finishing first really means a lot to me.  It’s great motivation.”  Melissa Steenkamp came in 2nd, while Andiswa Dingiswayo finished 3rd.

Marthinus du Preez (High School Pochefstroom Gymnasium / Potchefstroom) showed a clean pair of heels in the Boy’s U19 200m crossing the finish line first in 21.91 seconds.  “The PUMA School of Speed is a great series to increase your level of performance,” said du Preez.  “Placing first in the finals today is a great feeling.  This is the first time that I finish first, so I am very happy.  My advice to other athletes is to not doubt their ability.  There will always be downs.  Just believe in yourself and train hard.”  Phumzile Eno Mqolo came in second, while Jordan Kok finished 3rd.

Zenobea Jewaskiewitz (North-West University / Potchefstrooom) claimed victory in the Girl’s U19 200m in a deserving time of 24.75 seconds.  “The PUMA School of Speed Series is fantastic,” said Jewaskiewitz.  “There is such a great vibe, the people are excited.  It’s so nice.  Everybody is so amazed by this event.  I just decided that I had to run.  I didn’t expect to win today.  I just focused on my time.”  Melissa Steenkamp came in 2nd, while Anina van Zyl finished 3rd.

The athlete to beat in the Boy’s U19 400m was Romeo van Wyk (Northern Cape High School / Kimberley) who claimed victory in 49.33 seconds.  “The PUMA School of Speed is a brilliant event.  It’s well organized.  I am just happy to have been part of it.  I entered the event because I was looking for better competition.  By finishing first I’ve proven that I’ve worked really hard.  It encourages me to not give up and continue working hard.  My advice to other athletes is to never give up on your dreams.  Continue to work hard, time will come.”  Tshidiso Bantweni came in 2nd, while Dylan Botha finished 3rd.

Junior track & field stars were given the opportunity to meet South African middle-distance runner and 2019 PUMA School of Speed Vice Principal, Gena Löfstrand in the Vice Principal’s office at the stadium.

All entrants stood a chance to be scouted and contracted to the PUMA Squad. The contract will be for the duration of one calendar year.

Podium winners of each event final took home the following:

The APE/ASA table was used to determine the top 3 overall male and female athletes.