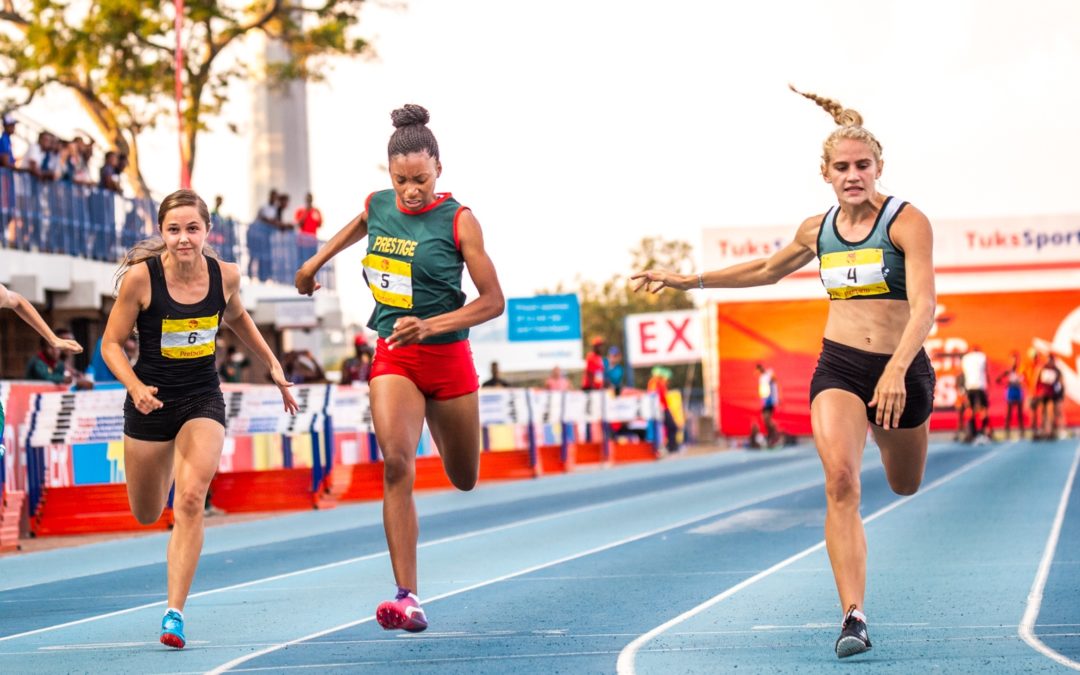 Track & field supporters were treated to a speed storm of note today (Saturday, 02 March 2019) with junior track & field stars following in the footsteps of the World’s Fastest Man Usain Bolt at the PUMA School of Speed #4 that was hosted at the LC de Villiers Sportsground (Pretoria).

Mark Gaines (Morningside) set a blistering pace in the Boy’s U19 100m claiming victory in a deserving time of 10.57 seconds.  “The PUMA School of Speed Series is a lively competition,” says Gaines.  “I came all the way from KZN just to compete here.  It’s one of those competitions where you get to test yourself, push yourself.  I think all athletes should do this, aim to push themselves to their limits.  This is a really nice competition that gives athletes that opportunity.  I am preparing to go to SA’s, so I wanted the competition.  My coach is trying to get me that competitive edge.”  Edwin van Wyk came in second, while Realeboga Manyeneng finished third.

Antonette van der Merwe (Centurion/ High School Eldoraigne) claimed the top spot on the podium in the Girl’s U19 100m with a lightning fast time of 11.61 seconds.  “The PUMA School of Speed Series is one of my highlight events every year,” says van der Merwe.  “The energy and everybody’s spirit is great.  For every athlete improving your personal best is a big thing.  The PUMA School of Speed ensures good competition with good times.  Finishing first today really means a lot to me.  The heat had a lot of good athletes, people who I’ve come a long way with.  My advice to other athletes is to never stop working for your dreams.”  The PUMA School of Speed’s first Head Girl, Rose Xeyi came in second, while Nicola van der Merwe finished third.

Zander van Stade (Centurion / High School Zwartkop) claimed gold in the Boy’s U19 200m in an impressive time of 21.30 seconds.  “The PUMA School of Speed is a big opportunity that every child has.  It’s also a very nice event that takes place every year.  I’ve worked hard these past two years to bring my times down.  Coming first means a lot to me.”  Wendell Wylbacht came in second, while Enos Mqolo finished third.

Nicola van der Merwe (Rustenburg / High School Rustenburg) sprinted to victory in the Girl’s U19 200m clocking a time of 24.09 seconds.  “The PUMA School of Speed is a fantastic opportunity for everyone to compete at,” says van der Merwe.  “The spirit is amazing and the event is really well organized.  I wasn’t really running to win, but instead just wanted a good time.  I am really happy with the time that I ran.”  Simone Kellerman came in second, while Sacha van Niekerk finished third.

Josua Gouws (Pretoria / Hoërskool Die Wilgers) was on fire in the Boy’s U19 400m crossing the finish line first in 47.48 seconds.  “Coming first in the finals means a lot to me,” says Gouws.  “It’s a lot of hours of hard work per week that has gotten me to this point.  When you’re rewarded like this, it really means a lot.  The PUMA School of Speed is well organized, the programme is on time, everything looks really nice and you receive really nice prizes.”  Martin Magumeni came in second, while Danell Fakude finished third.

Kirsten Ahrens was the speedster to beat in the Girl’s U19 400m.  Ahrens claimed victory in a well-deserved time of 54.65 seconds.  Amy Naude came in second, while Marzaan Loots finished third.

Podium winners of each event final were awarded the following:

The APE/ASA table was used to determine the top 3 overall male and female athletes.

All entrants stood a chance to be scouted and contracted to the PUMA Squad. The contract will be for the duration of one calendar year.

LIVE MUSIC:  Entrants and spectators were treated to a live performance by Lloyd Cele.