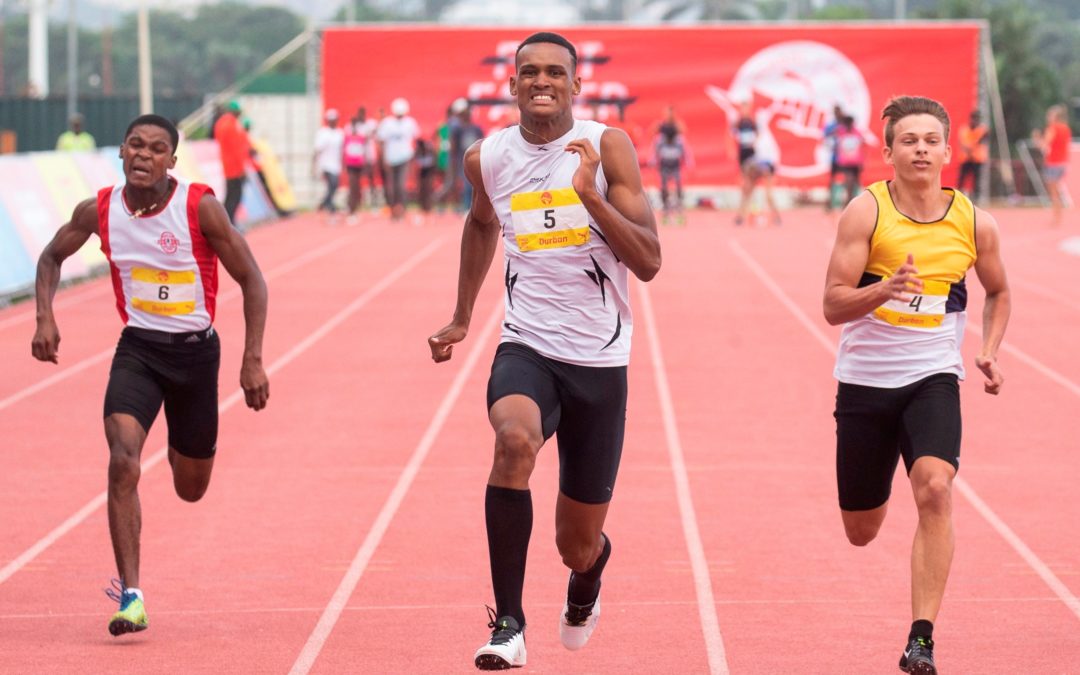 Seen here (in the centre): Mark Gaines (Morningside) was the speedster to beat in the PUMA School of Speed #3 Boy’s U19 100m.  Gains crossed the finish line in a deserving time of 10.88 seconds.

The Kings Park Athletics Stadium was buzzing with excitement on Saturday, 09 February 2019 when 720 junior track & field stars attempted to go #ForeverFaster at the PUMA School of Speed #3 following in the footsteps of the World’s Fastest Man Usain Bolt.

Mark Gaines (Morningside) was the speedster to beat in the Boy’s U19 100m.  Gains crossed the finish line in a deserving time of 10.88 seconds.  “This is one of the best events in KZN.  It’s prestigious and gives athletes the opportunity to compete on a high level.  It’s a really good thing to do for the youth.  This year I entered to focus on my training, I didn’t expect to do well.  My focus is on my technique and on how to improve.  Coming first in the final is a bonus.  It’ll motivate me for the rest of the season.  My advice to athletes is to work hard.  If you want the achievement you have to work towards it.  There is no other way.”  Morne Hattingh came in 2nd, while Thomas Xolo finish 3rd.

“I really enjoy the PUMA School of Speed Series,” said Bompass.  “It’s a fun way to compete with people around the country.  I really enjoy the 100m and 200m. The 200m is my favorite.  Coming first in the finals brings a great amount of joy to me as my hard work has paid off.  It’s a great honor.”

In the Girl’s U19 100m Snethemba Ngema came in 2nd, while Akhona Mathonsi finished 3rd.

In the Girl’s U19 200m Snethemba Ngema came in 2nd, while Thembelihle Dubazane finished 3rd.

Thomas Xolo (Umlazi, Durban) bolted to the finish in the Boys U19 200m in an impressive time of 22.38 seconds.  “The PUMA School of Speed is a great place for opportunity to grow, a great place for talent to be recognized and also a great experience for runners.  I got a bronze medal in 2016 in the 200m.  Ever since that day I promised myself that I would get gold.  Every day when I wake up and go for my morning jog I tell my coach that I’m going for that gold.  Today I got it.”  Morne Hattingh came in 2nd, while JD Prinsloo finished 3rd.

“The events are well organized, well supported and super exciting to be a part of,” said Löfstrand.  “The PUMA School of Speed Series is a great platform for up and coming athletes to showcase their talent and all the hard work they’ve put into their sport.  It gives athletes something to work for and something to look forward to, a reason to pursue athletics.”

“I’ve been part of the PUMA team since 2013,” says Pillay.  “The PUMA School of Speed Series is a great initiative that is definitely needed to help identify South Africa’s young talent.  I expect some great talent to be unearthed from this event.  My advice to juniors is to always believe in yourself and never give up on your dreams.”